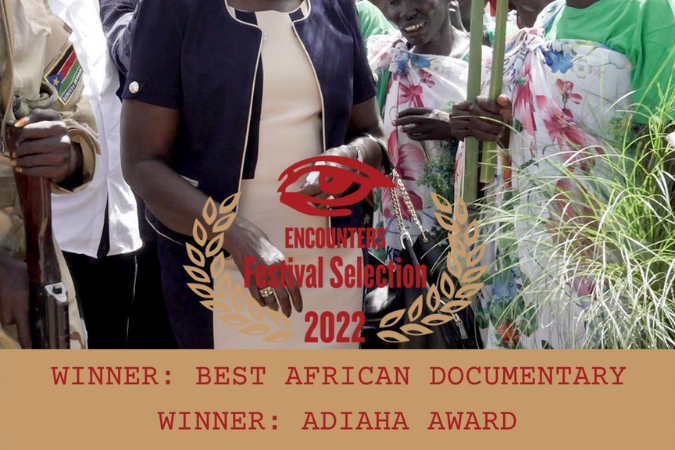 After a world tour that spanned several continents from Europe to South America, North America and Australia, No Simple Way Home returned back to the continent with an African premiere at the Encounters South African Documentary Film Festival that happened from 23rd June to 3rd July 2022.

Three awards were up for grabs during the festival: Encounters Programmers Choice Awards, Adiaha Award and Free Film School Award.

No Simple Way Home bagged two major awards including ‘Best South African/African Documentary’ voted by Encounters Programmers. Here is what they had to say about the film;

“We were moved and inspired by the exquisite interrogation of personhood, family, responsibility, and national identity. Akuol de Mabior’s clarity of vision is striking, and her film deftly synthesizes a wide range of themes that speak to what it means to come from a place and yet be outside of that place.  An assured and confident debut, No Simple Way Home blends
the personal and the political in profound ways that rise above cliché and announces the arrival of a major filmmaking talent”:
– Encounters Programmers
Receiving this award was such a great honor, especially because ‘No Simple Way Home’ is the 2nd LBx Africa documentary to win ‘Best African Documentary’ after Softie won in 2020.
The film also won the prestigious Adiaha Award presented by the Ladima Foundation with Encounters to an African Woman Filmmaker for Best Documentary. This year, the Jury included Nyasha Kadandara, Karin Slater and Zanele Mthembu.
“No Simple Way Home draws you into a world of humble politics in an intimate way through beauty and music and strong female leads. The film asks difficult questions through profound mother-daughter conversations in a country in its early years of formation. Akuol de Mabior emulates her mother’s humility in the way she tells a personal story.”
– Adiaha Jury
Thank you to the entire team at Encounters and Ladima Foundation for recognizing and awarding our story.

Our next stop is Durban International Film Festival as we actively plan to share the film with audiences in East Africa with a priority on South Sudan.